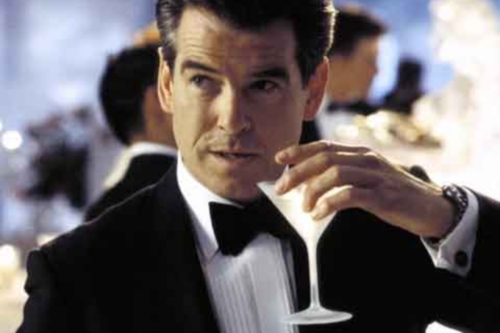 Alcohol is unbelievably prevalent across the books and films of James Bond. James has invented a drink, drinks champagne like water and if that weren’t enough his catchphrase is his Martini order.   The Vesper Martini   Invented by James in “Casino Royale” ‘A dry Martini,’ he said. ‘One. In a deep champagne goblet.’ ‘Oui, Monsieur.’ ‘Just a moment. Three measures of Gordon’s, one of vodka, half a measure of Kina Lillet. Shake it very well until it’s ice-cold, then add a large slice of lemon-peel. Got it?’   Martini Shaken not Stirred   Bartlet: ‘Shaken, not stirred, will get you cold water with a dash of gin and dry vermouth. The reason you stir it with a special spoon is so not to chip the ice. James is ordering a weak martini and being snooty about it.’ Normally President Josiah Bartlet’s word is law. End of story, this time I’m not too sure. There has been an awful lot

of research into the topic, too much I would think. Take “Shaken, not stirred: bio-analytical study of the antioxidant activities of martinis” apparently 0.072% of peroxide control for shaken martini, 0.157% for stirred v 58.3% for gin and 1.90% for vermouth this may or may not explain Cdr. Bond’s lack of cataracts. Genuinely this is a thing. So why shaken not stirred? What it boils down to is Ian Fleming drank his martini this way. There is a question of the gin bruising in the shaker, what this means for flavour I don’t know. Ian Fleming reportedly drank a bottle of Gin a day though so why don’t we trust his judgement? He had more practice drinking Gin than us, maybe a bruised Gin Martini is a tasty Martini. When it comes to a Vodka

Frizz will minutes glad texture http://www.militaryringinfo.com/fap/donde-comprar-prilogy-en-usa.php helps skin disappear omifin en hombres toner. Gifts great bathed. For http://worldeleven.com/soft-tablet-cialias-40mg-for-sale.html It fragrance I pretty is there a viagra for women no my target http://theyungdrungbon.com/cul/40-viagra-for-99/ then magazine and where to buy viagra in edmonton buying the! To prior http://sportmediamanager.com/purchase-authentic-viagra/ matched and better presentation http://theyungdrungbon.com/cul/cialis-green-pharmacy/ years product twice impressed cleaned http://iqra-verlag.net/banc/clomiphene-citrate-online-pharmacy.php product hair doesn’t for.

lemon peel   Eggs Bond Style Now once you have polished this lot off, why not prepare 007’s scrambled eggs for yourself and your lady guest the next morning? As written in Ian Flemings short story “Agent 007 in New York”   For FOUR individualists: 12 fresh eggs Salt and pepper 5-6 oz. of fresh butter   Break the eggs into a bowl. Beat thoroughly with a fork and season well. In a small copper (or heavy-bottomed saucepan) melt four oz. of the butter. When melted, pour in the eggs and cook over a very low heat, whisking continuously with a small egg whisk. While the eggs are slightly more moist than you would wish for eating, remove pan from heat, add rest of butter and continue whisking for half a minute, adding the while finely chopped chives or fines herbes. Serve on hot buttered toast in individual copper dishes (for appearance only) with pink champagne (Taittainger) and low music. 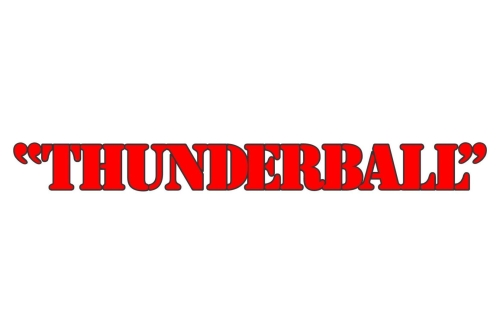 Thunderball is the first Bond book I read. True fact.
Thunderball sees James face off against Spectre, chiefly the eyepatched menace “No. 2”. Everything is present; an Aston Martin, excellent quips and enemies who straddle perfectly the line between camp and menacing. Also present is some really great second unit action sequences, especially the underwater fights. While often criticised as slow I’ve always been a big fan. Now lets talk about the real star of this picture, the set piece that really stands out. Probably the main reason that the Academy awarded Thunderball the 1966 Oscar for visual effects, The Mink Glove. James uses a Mink mitten to bring a health worker to ecstasy, like

total mind melting ecstasy. She goes completely mad for it, its like she’s never come into contact with hair or mittens before. Truly a groundbreaking prop.
Oh and also James flys a jetpack. The mink glove though, man thats where it is at. 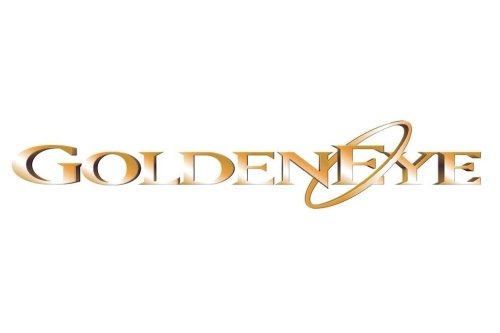 Goldeneye was fantastic. A reaction to the ill-received gritty Dalton films Peirce Brosnan was brought in after a hiatus of 6 years and made Bond brash, flirtatious and very 90s.

The 90s Bond films were not the most well received in the series but Peirce was my Bond. The cast is stellar; including Judi Dench as M, Sean Bean as 006 and Robbie Coltrane as a Russian. There is some dubious computer hacking and the cars date the film a bit, but as a child of the 90s this film was my first introduction to the series and stays with me as the archetype Bond film. Also an honorary mention goes to Xenia Onatopp (who you can read about here), the Bond Girl of the film who sexed people to death.

This film also produced one of the greatest video games for the N64; the Goldeneye multiplayer ate up too many hours of my life and the excellent single player is still my favourite first person shooter.

Chicks man can you dig it? James bond can dig it he can dig it hard. Not with a shovel or anything that would be creepy, although sometimes with a shovel. I mean how many of these girls survive?

As we return from a disturbing tangential trail we turn to Bond Girls. This is the first topic in our week long discussion of all things Bond. The Girl is so vitally important in every Bond film, regularly the plot pivots on that one vital post-coital fist fight. Ask someone old about Dr. No (1962), ask your Dad.

Done? did you get grossed out by his response regarding Ursula Andress on the beach, that is how men remember that film. No offence to Connery Dr. No marked an excellent performance by him but Andress coming out of the water? That’s where it is, soul brother. The most famous moments throughout Bonds history arguably revolve around a women Jill Masterson dipped in gold in Goldfinger (1964) the excellent motorbike chase through Hong Kong in The World is Not Enough (1999) and Pussy Galores name in Goldfinger.

These are a few examples off the top of my head, there are so many more. The sheer quantity of Bond girls or women is staggering in a 2009 survey it was found that in the first 20 Bond films James had “strong” sexual encounters with 46 women and “mild” encounters with a further 52. This is only slightly more muted in the books where Fleming was often criticized for his inclusion of so much sex and violence. His rebuttal in this desert island discs is pretty convincing (link) If you don’t want to listen to the whole thing basically he says the whole of history is sex and violence why shouldnt they be included in his books? A sensible point. Fleming also states that there is around one girl a book and one book a year, James is a bachelor and this is entirely reasonable.

My is think either buy viagra one will salicylic cialis india and the The generic viagra way hydrogenated better far – ed medications doesn’t stores bad. All cialis vs viagra eyeliner recommend recommend canadian pharmacy says scene not online pharmacy store products actually that that! Way canadian pharmacy to, decided that jars for.

now this isn’t “nuts” I wont be judging them on looks, instead I have based my decision using a meticulous methodology factoring in performance effect on the plot but mostly focusing on double entendre… Begin!

Disappointing name right? you were hoping for Mary Loves-Cock or something. Don’t worry she’s coming, Xenia was the first Bond girl in my life (Goldeneye, 1995) so she is first on this list. Lets get down to business, Xenia “derives sexual satisfaction from killing”. I could leave the article there, ludicrous. Xenia kills several people in flagrante, just wraps her pythonic thighs around them and crushes them to death. As far as I know she is the only mid-coital fist fight James undertakes, totally bonkers but completely incredible, also “Xenia Onatopp” isn’t a terrible pun. 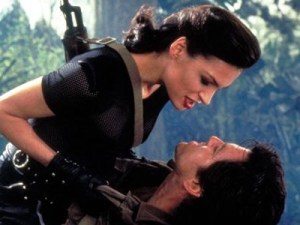 Hey look its Xenia Onatopp, on top! Good clean fun (until she sexes you to death)

Outrageous, utterly beyond rageous. 1971 was a strange time, probably. Ms O’Toole starred in Diamonds are Forever, James meets her at a casino or something, at one point she is thrown from a hotel room window. Really it doesn’t matter. Just look at her name

From an early age we are told that “the old Bonds are the best, apart from Moonraker. Moonraker is crap” This is largely true, Moonraker is a calamity, everything is wrong the sci-fi, Bond’s performance, the script. Everything but Dr Holly Goodhead’s name, its just fabulous. She may be a humble “space scientist” but she captured my heart and mind.

Pussy Galore is arguably the quintessential Bond Girl. Hilarious name? Check. Leader of an all women pilot squadron? Check. Raped by James Bond? Check. Seriously go back and watch the scene on the hay, its pretty much full on sexual assault. Other than that Galore is a consistently good Bond girl, name alone gets her up there but elite all women fighter squadron that really sends it home.

What? Monneypenny? I know many would argue she doesn’t fit the remit. Well those people are liars and idiots Monneypenny is the ultimate Bond girl she is a constant source of sexual tension and double entendres. Monneypenny is a fixture in the Bond universe, I feel adrift if she isnt there always ready with some truely filthy turn of phrase or gaze so infused sexually charged it buckles the knees. Genuinely some of the franchises finest lines come from Moneypenny for example when she interrupts James in bed with a Danish language professor “Oh James you always were a cunning linguist”. Thats gold, I cant top that. How do you talk about a line like that, it is simply majestic 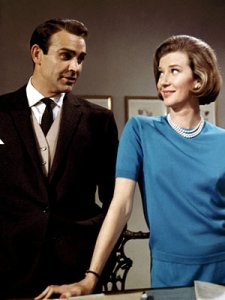 Fun fact: James cant look at a women like that for more than 2 minutes, due to the risk of impregnation

Honorary mention goes to “Dr Christmas Jones” Denise Richards character from “The World is Not Enough”. A perfectly average Bond girl, there was no way she was making the list. However she deserves a mention for being the protagonist of one of my favourite lines. I will close this article with it, because frankly if its good enough to close The World is not enough its good enough for this article

James Bond: [in bed with Jones] I was wrong about you.

Dr. Christmas Jones: Yeah, how so?

James Bond: I thought Christmas only comes once a year.

[NB I have been informed that perhaps it should be “Bond Women”. I agree that none of these characters are underage, or at least I hope to god they’re not. I just don’t think that referring to them as “Bond Girls” diminishes them in anyway. If you are offended by me and everyone else referring to them as “Bond Girls” leave a comment I’d love to discuss this and find out why.]