Pioneers is a column that focuses on discussions surrounding digital culture, including news, reviews and features of games and other webby things that are going on that are interesting.

First off welcome to Pioneers, a new column I”ve set up which is supposed to be a space for me to talk about something interesting or different you clever people on the web are doing, and that other lovely people out there might not know about. I”m not sure I”m happy with the name of it yet, but most of the good names have already been taken or are one of those awful words of demonic offspring – like some bungled mess you”d expect when two cars collide. Words like “Netocracy” or “Infotainment”. I especially wasn”t keen to add a “2.0” to the end of it.

Needless to say, I doubt it will be particularly pioneering, but you never know, you might like it.

So, I thought I”d begin with something easy enough to talk about inspired by a release this week: the bundle.

Now for those of you with their head buried in sand (and not the good silicon type sand, casual everyday beach sand) you might have missed the fact that the games industry – and indeed most entertainment industries for that matter – have found their business models challenged by things people do on the internet. Downloading, sharing, piracy – those sorts of dreadful things. These have not been good for business, or so we have been told.

One of the ways the games industry, closest to these technological changes, have countered these practices with innovative ways of selling games for cheap. Much of the buzz surrounding these bundles have been very useful for selling, and allow people who have liked one game to try other games recommended to them as part of the bundle.

The great thing about these bundles is that they work. Quite well.

In the case of the Humble Indie Bundle – now in its sixth official iteration, but with countess other android only packs and special editions in between – the premise is simple: pay what you want, and choose where that money goes, sharing the spoils between developers, charities (Electronic Frontier Foundation (EFF) and ) and humble themselves who now have a helpful distribution technology which is used by independents to sell their own wares.

The genius of this system is plentiful. The distribution model itself is fantastic, allowing the consumer to have a say in how money is distributed, as well as choosing how much they are willing to pay. Simplicity is key, as without having to log in, one can simply click a few buttons and for next to no money at all (as little as a penny), they have at their disposal enough games to last them a few weeks – or until the next bundle launches.

The charity aspect is crucial too – people are always willing to give a little extra if the money is going something worthwhile, as donating is already a habit established for charity. As well as this, two technology centric charities effortlessly receive an almost guaranteed revenue stream, which is particularly helpful when you have a charity that defends the rights of those notorious to some for not paying for things.

Another feature worth mentioning are the leaderboards displayed on the page ranking and rewarding the highest paid individuals (often well recognised industry types who have digital visibility from games that have successffully emerged in similar set ups) and showcasing which Operating system has paid the most, and how the bundle itself is doing. This mild form of “gamification” – a concept of making things in the real world like games to make difficult or boring tasks fun – adds to proceedings. Beating the average unlocks an extra game and other content, with this average changing – by paying extra, you make it that little bit easier for others to afford that average.

The games themselves tend to already exist, and are usually quite popular before they make it into the bundles – which makes the whole thing that much easier to sell; games which have their own audience bring this audience to five other games they might like, and together the entire industry benefits. Plus, and I think this is a really neat feature for the bundle, if you”ve already pirated the games, you have a way to make amends of your guilt financially.

Speaking of piracy, back when the second bundle was being released, Jef Rosen (one of the developers) revealed to TorrentFreak some of the opinions from an anonymous survey he”d set up to find out why people would still pirate games they could legitimately get for free using bitTorrent, and the results were simple: torrenting was “extremely convenient way to transfer files”. They added the distribution officially to their service with phenomenal success, saving themselves bandwidth costs in the process.

(sticking it to the man) but for most it was convenience, while others wanted to share files with friends having already paid on behalf of them all. For those without the means to pay however, there weren”t other options – this includes those too young to have their own debit cards, or where services like google checkout and paypal weren”t working; having found statistical amounts of pirating around 25% the response from Humble was perfect: “”How many legitimate users is it ok to inconvenience in order to reduce piracy?” The answer should be none.” No need for DRM, “we will just focus on making cool games, having great customer service”. Their one request – if you are going to pirate our games they ask you to shout about the games to friends, and “please consider downloading it from BitTorrent instead of using up our bandwidth”.

Bundle is not the only bundle that”s out there – the premise has been copied and expanding upon all over the place including current offerings “Bundle in a Box: Deep Space” and Indie Royale”s “Back To School Bundle” developing the theme, with many more out there no doubt.

Could this work for every release? No. it”s difficult to imagine an IP like Assassin”s Creed being released like this – not until the game has received a separate release and is being re-packaged for a few extra pennies or in anticipation of the next instalment, but there might be something of which developers should take note.

These sales work because of the reduced costs in making the games that keep overheads low – and the fact that most of these games have already been successful. These platforms offer extra publicity that really push their recognition into a mainstream that they may or may not already have, and thus help fuel sales of future games these companies produce; many of the games end up getting pledged into open source (allowing the games” codes to be seen by anyone, and thus handing over the keys for unlimited meddling and community adaptation).

The real issue is not how to stop people not paying – but making sure your stuff gets seen by the people willing to pay at all.

Now to the Games.

Short, pithy reviews of the games featured in this, the sixth Humble Indie Bundle. Once again, it”s a cracker, with some really rather wonderful favourites from the Indy development world. Really it makes little difference what I say when you can pick the games up for yourself for next to nothing at all, but for what it”s worth:

I must have played for hours when I bought it for the PS3 a few years ago – a breakout clone with some extra tools, it”s a classic retro game souped up with 007 gadgets, with a couple of handfuls of barbiturates shoved up its jacksie for good measure. Frenetic gameplay with an equally pumping soundtrack guarantee some extreme arcade fun. If you need a soundtrack for your next gym session, this too comes bundled with the purchase. Instant Classic. 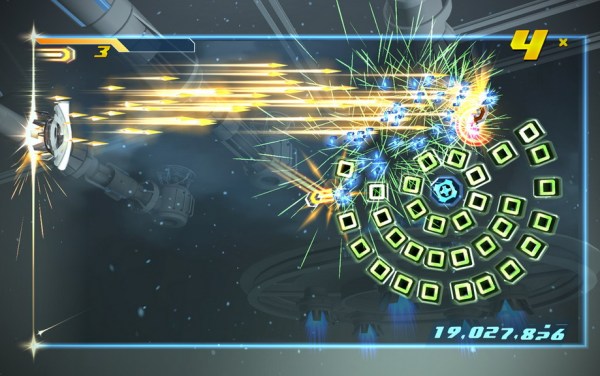 “Shatter” just makes me want to wet myself

S.P.A.Z. (Ships, Pirates and Zombies) is a game that according to its developers harkens back to the kind of games that people don”t make any more; with mod options built into the game, this thing has got the legs to last you if that”s what you want; if flying through space, building fleets and mining asteroids sounds like fun to you, then the fantastic presentation and general design should make this an ideal purchase, but didn”t necessarily push my buttons.

is a game I”ve enjoyed far more than most I”ve played in the last month. Set on a mining station in space, the game sees you play a rotund labourer armed with a laser tool that allows you to grab shoot and throw objects to solve puzzles and save the world. It has a gentle learning curve, metroid-esque in its interwoven deployment and every time I think I”m getting to the end of the game I”m suddenly thrown into a whole new level and given an upgrade to mix up gameplay; I don”t care much particularly for the story, but this puzzle platformer develops its core mechanic so well, and so beautifully, that for me it is an essential purchase. Worth buying the bundle for this on its own. 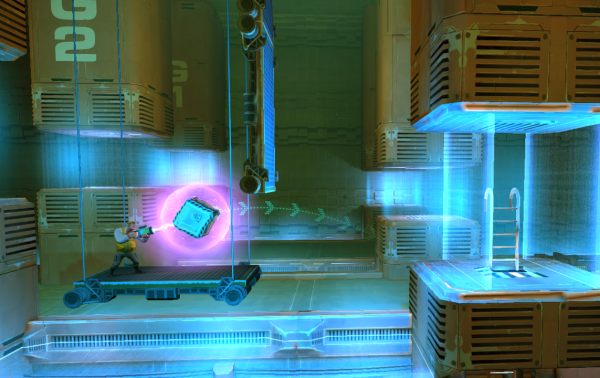 Rochard makes my balls tingle. It must feel so nice to let your genitals loose in zero gravity.

seemed enjoyable for my brief stint; you play Arkwright, an inventor, who can create water-creatures to push buttons and open doors. Working out the patterns and rhythms of certain buttons allows you to progress through the game with a steam-punk aesthetic that lends the game an awesome atmosphere to carry off what is essentially a solid physics puzzler; it didn”t grab me the way that Rochard has, but once again the puzzle-platformer genre appears to be the auteur”s choice for game development, allowing the content and form to be delivered succinctly in a package that will pass away a couple of hours with delight, if not with a little frustration and difficulty.

is a great little RPG, where you design a hero and thrust him into a world of magic, goblins and swords, delve into mines, plunder treasure and trade in villages accompanied by your faithful customised companion – in my case a wild cat called Lawrence. I stopped myself before I could get hooked, knowing full well that if I played much more I would be lost for days in the labyrinthine worlds, desperate to level up beyond my means. The splendid visuals matched with simple controls are a killer combination for someone looking for an arcade style RPG, but I alas, could not cut it having to eventually engage with real life. God I miss Lawrence.

Bonus Extra: Dustforce is I suppose a “clean-em up”, a fast paced platformer where you must throw yourself from wall to wall, speed cleaning mansions with ninja-like aplomb; Due to my shitty PC I found the controls a bit stressful for my chubby fingers, so I didn”t get a chance to explore the games full potential, but I imagine the theme is developed to satisfy the most dexterous of digits- it certainly looked great and very easy to jump into if so inclined.

So, that”s it. I hope you liked it. If you have anything you think is interesting in the way that the internet does stuff, let me know. I”ll do a bit on kickstarter and throw in a review of FTL next week. Do give the bundle a go, it”s wicked fun.