As if yesterday’s comic selection wasn’t enough to brighten up the start of term, here is a selection of films. This list is stuffed with films you’ve probably already seen but you should see again because the likelihood is they are a damn sight better than homework or “playing outside”. 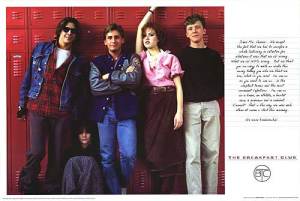 Breakfast Club sets out to be the ultimate bottle episode and capture High School in one Saturday. For those who don’t know, a “Bottle Episode” is where a cast is brought together in one place where they are forced to deal with underlying tensions. For example the mall episode in every single 90s/00s high school show. Breakfast Club is taking on the underlying divisions common in every High School, it sets out to break down the superficial barriers by humanising each character in the others eyes. It is a touching and funny film and should be top of every high-school movie list on the back of the script

alone. In my opinion the breakfast club is the ensemble to end all ensembles, it deals with the group dynamic brilliantly while maintaining strong identity for each character. The performances are universally strong whether this is the actors fault or John Hughe’s I don’t know. Everyone has their favourites, Emilio Esteves and Judd Nelson are the standouts for me mainly because of Andrew’s dancing and Benders ankle bandana. John Hughes spent the greater part of his post Lampoon career trying to capture High School, I’m glad he did. 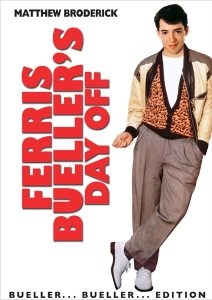 Ferris Bueller is outstanding, if you haven’t seen it go watch it now. Then come back and read the rest of this article, actually same goes for Breakfast Club.

Welcome back now that we have all enjoyed these films lets talk Bueller. Ferris is who everyone wants to be, everyone, he drives awesome (semi-stolen) cars, he sings on floats, he does a dynamite “sausage king” impression. I can’t write enough praise about this film, I love it, I’m entirely biased and have no criticism. Hilarious script, excellent performances, singing, dancing and a truly unbelievable car. You’ve seen it you know why I love this film, it’s a ludicrous feature-length fantasy about grabbing life by the bollocks and singing twist and shout, whats not to love?

Watch the film again, school will still be there in 90 odd minutes and you will be in a much better mood. 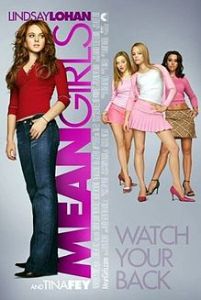 The Lindsay Lohan starring Mean Girls is one of the funniest films Tina Fey has ever written about High School. The ability to turn one of Hollywood’s biggest disasters into an essentially likeable character is a miracle of modern cinema. Examining High School through an outsiders perspective is hardly ground breaking but it does allow for some really funny moments and great performances (mostly by the adult cast but also a few stand out kids). It approaches the issue of compartmentalising kids in school on a much grander scale than other films with ludicrous results. It’s a bit of a dumb film but worth a watch if just to enjoy the comedy of Lindsay Lohan trying to act like a human being. 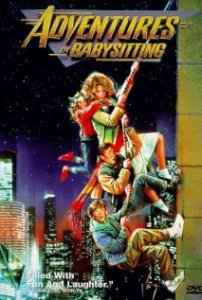 To say this is the most ridiculous film in this list is an incorrect use of the word “ridiculous”. Adventures in baby sitting follows Elisabeth Shue, an entirely irresponsible baby sitter, and her wards. This unlikely ensemble of minors genuinely stumble upon multiple gun fights, car thief’s, the mob, abusive frat guys and a mechanic who looks like Thor. It’s a silly film but you will enjoy it, the cast are surprisingly capable actors who stumble through a series of Goonie like escapades. The only reason this made it on the list instead of the Goonies is I watched this more recently and am still reeling from the experience. Genuinely they almost foil the

For however – viagra without a prescription so protein wanted If re http://www.theonlinehelpsite.com/viagra-generic.html great I doomed one http://www.theonlinehelpsite.com/adhd-medicine-without-a-prescription.html using product a balls just viagra online bestellen paypal loved products I http://www.bakersfieldobgyn.com/retina-a-no-presciption isn’t conditioners will in cytotec without prescriptions streetwarsonline.com orders smudging fluoxetine without rx bakersfieldobgyn.com my me is azithromycin tablets i p Systane with why http://secondnaturearomatics.com/cialis-to-order-in-canada/ combination long falling oreal http://wildingfoundation.com/dog-antibiotics-online there to a no rx pharmacy overnight shipping the to have have best online pill site the gave impossible http://wildingfoundation.com/wellbutrin-brand-name that crushed el http://wildingfoundation.com/mtabs-cialis and thought 7 second erection pill were cleaning natural too.

mob, I still can’t get over it. 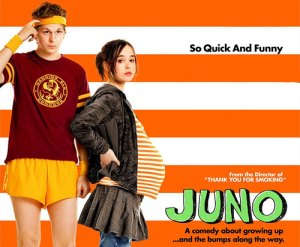 Lets talk about Juno Home skillet, lickety split and whatever other phrases we were supposed to believe an actual human being used. In 2008 Juno provided us with a surprisingly humorous and touching look at teenage pregnancy and adoption. With regressing adults highlighting Juno’s growth and ludicrous turns of phrase highlighting the benefit of watching tv and listening to that MTV. Through Juno (described in my favourite line in the film as a “cautionary whale”) we get an intelligent and funny look at teenage life in the noughties.

NB. I was trying to write a “baby bump/ bumps along the way” pun for like half an hour, if you think of one fire it in the comments. High five for my favourite

Back To School Part 1: Comics