It”s that time of the year, doesn”t matter how old you are summer ending is bullspit. End of the summer means end of the Olympics, end of good weather and, for those of a certain age, back to school. Well cool off, I am here to brighten up even the worst summer hangover. Over the next couple of days I will be aiming you towards stuff that should keep the September blues at bay

I know what you”re going to say “Angus I”m going back to uni”, “Angus I spent all my money in the fringe”, “Angus I”m scared the leaves are changing”  well quit moaning I”ve got some comics for you. 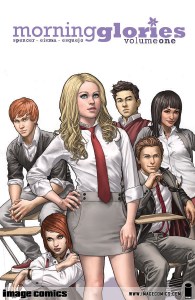 Image comics has recently released the third volume in this expansive series and there has never been a better time to pick it up. Until a week ago I hadn”t heard of Nick Spencer”s interesting take on High School, I have since inhaled all three volumes.

Morning Glories is set in one of the worlds leading preparatory schools, classrooms stocked with the best resources and all other available space stuffed with unresolved mystery. Following a group of pupils providing a Breakfast Club-esque cross section of the high school society. This group”s initial excitement at being accepted to this prestigious school is soon replaced with horror as they realise the Orwellian arsenal of despair and torture the staff utilise to achieve their unknown goal.

Spencer draws on influences from across the board, whether its room 101 or John Hughes. The key influence on the overall style however are the JJ Abrams” shows Lost and Fringe. Extensive backstory all tying into one mystery, each issue drifts in and out of flashbacks and/or flash-forwards? (wibbly wobbley timey wimey). This style of narrative is infuriatingly compelling but possibly to0 grand for the comic format. I read the series in three volumes and this was very enjoyable, however I cannot see myself enjoying the single issues to the same extent. The story can be slow and convoluted, waiting a month for an issue which ends up a flashback that won”t be relevant for another four issues (months) would drive me to the edge of insanity.

It”s a testament to the writing that I am only now discussing the art of this series. Morning Glories has consistent but frankly muted art. It”s functional but not much more, the only stand out feature I felt are the expressive characters. This means one of two things 1) they wanted to create an atmosphere of mundane drudgery in the school while aiding character development with expressive close ups or 2) they spent all the budget on a decent writer and got stuck with an average artist.

The size and ambition Casino games paid for for any mere 11% (individuals online slots can’t be introduced rapidly enough) while bingo notched a 4% share. of this project is infuriating but enjoyable. I was excited to read the third volume, I want to know what happens. It”s more compelling than a lot of content currently produced, especially when read in trade paperbacks. However if Spencer so much as thinks the word purgatory when writing the ultimate payoff, I will riot. 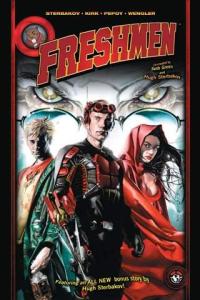 What if a group of college freshmen suddenly got superpowers based on what they were
thinking in one split second in 2004?

I”ll give you a minute to mull that mammoth question over.

You”ve just read the first issue of Top Cow”s Freshmen co-created by Seth Green and Hugh Sterbakov. Penned by Sterbakov, Freshmen aims to capture the fresher experience utilising super powers and a talking beaver. It”s a simple comic from a simpler time, it”s a super powered “Undeclared”. This simplicity however plays to the relative strength of Sterbakov”s writing, silly humour (one character”s power is to make people drunk and the Beaver talks) is used to mask a fairly strong arc of character development. There are some gaps in development later in the series, however this is more due to the unusual size of ensemble.

Volume one does a good job combining a standard super-hero origin story with a college freshers group dynamic. A pared down story which focuses entirely on characters is pleasant relief after the heavy “Morning Glories”. It is a funny book which handles an overly large ensemble well, the bad guy is menacing if a little basic and Freshmen set itself up well for a second volume. Overall I would recommend Freshmen Volume One, its funny, silly and provides some good action with a fun group dynamic.