This year’s Great British Bake Off has been an unprecedented success. Viewing figures have steadily risen as the competition as gone on, peaking during last week’s French-themed semi-final at a little over five million. Clearly, the show’s producers have stumbled upon a very successful formula – but what is, dare it be said, the secret ingredient?

Of course, the most obvious answer would be that getting to drool over row upon row of mostly beautiful sweet treats – without any of the calories! – is a rather alluring concept. Each week, the contestants produce an

array of cakes, biscuits, pies and pastries with exceptional technical skill and innovative flavours. It’s undeniably inspiring, and it would be surprising if the amount of baking done in households across the country hadn’t increased since the beginning of August. 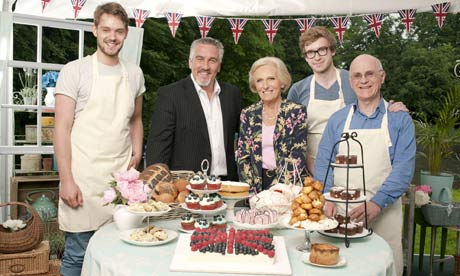 The bakers’ masterpieces (as well as their occasional calamities) are certainly reason to tune in. However,

it’s the subtle nuances of the show that make it such an enjoyable hour. In perfect opposition to the majority of talent competitions today, the Bake Off appears to be truly harmonious. The competition is always friendly; the contestants seem to get on, celebrating with the week’s star baker pokies online or picking someone up after a disastrous bake. There seems to be very little resentment or jealousy: everyone is gracious in both victory and defeat.

As judges, expert bakers Mary Berry and Paul Hollywood are a fantastic pair: politely dishing out criticism when necessary, coupled with a disappointed-yet-not-withering look – especially when some pastry has an unfortunately “soggy bottom”. Conversely, though, they can be kind and complimentary without ever lapsing into meaningless superlatives. All television judges could learn something from this dream team.

Hosts Mel and Sue are the other superb pairing on this show, milling around among the bakers as they work and making typically astute observations. Their short weekly investigations into the history of British baking are educational and break up the show nicely, but where they really stand out is in terms of delivering the results. There’s no scripted deliberation between the judges (at least, not in front of the bakers), drawn out tension, or overly bed music – the announcement is simply made, everyone hugs. Even Paul and Mary get in among it all, truly getting into the spirit of the show.

And it is that, the spirit of the show, which seems to be the key to its success. It’s near impossible to watch The Great British Bake Off without becoming entangled in the hopes and dreams of the amateur bakers, wishing Mary Berry was your own kindly great-aunt, and making plans to attempt your very own choux pastry showstopper. The Great British Bake Off has done incredibly well, and tweaked the recipe until it’s just right – long may it continue.

The Great British Bake Off final is on BBC2 tonight at 8pm.

Nanu on Bond: Angus on Thunderball