It seems like an absolute age ago. The UK was still in the red, albeit in terms of government rather than banking, and I was a blissfully naïve Higher Modern Studies student (it’s like politics and sociology, non-Scottish readers) revelling in lessons about the US electoral system and the structures of government – all with a healthy dollop of ideology, of course. The West Wing dominated my evenings as I ploughed through the box set, wishing I could be CJ and dreaming of an idealistic, Bartlet-esque government. It was shiny, exciting – and it was happening in real life.

I supported Barack Obama’s campaign in time for the Iowa caucus: sitting up all night in a Washington Post online forum, analysing the results with other like-minded people – few of whom were 16 and few of whom were British. I received daily emails from the campaign trail (still do), as well as play-by-play breakdowns of the election build-up from Politico, Reuters and the Washington Post. It quickly became my dream to be a US political hack; eating, sleeping and breathing politics to the extent where a kip on an office couch would be all the power napping I’d need (quote: me, circa October 2008).

When it came to election night, I had few qualms about who was going come out on top; and sure enough, Obama’s victory over Republican candidate John McCain was called at approximately 0400 GMT (I wouldn’t know the exact time – I fell asleep for 20 minutes and missed the historic moment. So much for power napping).

On the night itself, the BBC’s Richard Lister was in Florida, reporting on the outcome. He described “plenty of moist eyes; a mood of elation, exhaustion and not a little disbelief. People shouting ‘yes we can’. A grinning man in a beery ‘change’ t-shirt says ‘NOW it can begin’.”

Obama’s entire campaign was built on hope, change and a better future. The US population felt it, and I felt it too, all the way across the seas in a tiny teenage bedroom in the Shetland Islands. Things were going to be good.

Fast forward four years. The recession never left. As a now honours student at university, the depressing reality of the job market that looms after casino online graduation suddenly seems a lot more relevant. Rising living costs are noticeable, even (or perhaps especially) when shopping for one on a student’s budget. Social freedoms, such as a woman’s right to choose what she does with her own body, and gay marriage, are things I now fully understand the importance of. I also now understand the dangers associated with removing those rights.

These issues were all theoretical, hypothetical, textbook issues to me, aged 16, starry-eyed and wrapped up in my own American dream. 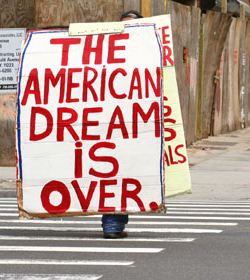 I’ve grown up a bit

now, and the world has too. Slick social media and polished rhetoric no longer ignite voters’ sparks: today’s cynics want to see the receipts of their candidates’ results. Results that make improvements across the country, for everyone. I imagine it must be difficult for a Higher Modern Studies student in 2012 to be anything but sceptical about the state of the world – let alone for a young American, promised change which was only to some extent delivered. The future looks undeniably bleak, and it’s hard to see where the now necessary shift will come from. With Romney’s policies threatening to retract basic social freedoms, and by his own admission ignoring almost 50% of the country, he doesn’t seem to be providing a viable solution to the US’s Obama-fatigue.

Personally, I’d still be voting for Obama. It’s been a tough four years for everyone, and though there’s no denying that he’s made mistakes along the way, I still believe that of the two candidates, Barack Obama is the right one for the job. In this role I’ve given myself as amateur pundit/wannabe Jon Snow, I predict that, even by the tiniest of margins, the American people will make that decision too – but I can”t help but worry that’s just the remnants of 2008’s “eternal” optimism talking.