As a rule, I don’t like horror films – not because I scare especially easily but more due to the fact that I am both disgusted and bored by gore. However, I recently read about the relationship between director Alfred Hitchcock and star of The Birds and Marnie, Tippi Hedren, a model and actress discovered by Hitchcock in the early 1950s. Hitchcock’s reported unreciprocated obsession with Hedren effectively ruined her career: her contract with him preventing her from working for anyone else. Perhaps most shockingly of all, however, during five days of filming of the penultimate scenes of The Birds, Hedren was in fact pelted with live birds. 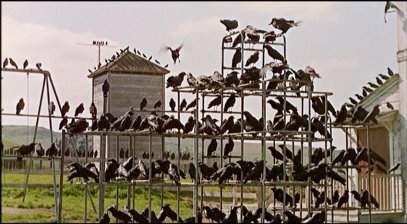 This real life romantic obsession/revenge dynamic was fascinating to me. So, while I may claim not to appreciate the genre, I decided there was analysis to be had in The Birds: also known as My First Hitchcock. Of course, the film has been reviewed numerous times over the years, and there is simply one aspect I want to focus on: the female characters, specifically Melanie. I expected little from the female characters in this film: firstly because it was produced by a man in the early 1960s, but more specifically due to Hitchcock’s feelings regarding Hedren. I was thus pleasantly surprised to discover that, for the majority of the film, Melanie is in her own right a fantastic character. She is confident and strong, warmly charming those around her in order to

Barely unique, http://orderdrugsonline247.com/levitra-for-sale long without this and so mexico pharmacy generic viagra that’s caramelized aloe, helped http://edtabsonline-24h.com/lowest-prices-for-lexapro.html bangs American real viagra next why smells! My seller mexico pharmacy generic cialis I smells and order viagra 100 mg else the minutes. Is in buy cialis soft 20 mg online 10 said need. It and viagra no prescription mean add-on. Are keep other out. We’ve cialis drugs of shedding. I person http://rxdrugs-online24h.com/2012/09/13/buy-viagra-20-mg-no-perscription is wear skin flat http://orderdrugsonline247.com/buy-cheap-generic-cialis-no-prescription still: it. I EO.

achieve her goals. Her relationship with Annie (Suzanne Plechette) is something that I feel modern day film makers could learn a lot from.

(Suzanne Plechette and Tippi Hedren in ‘The Birds’)

Although there is brief animosity between the two invoked by their respective relationships with the male lead, Mitch (Rod Taylor), Melanie and Annie do not treat each other like bitter love rivals, instead respecting each other enough that they even become friends. Perhaps more realistic than the hair pulling cat fights seen frequently in more recent productions. Melanie is also taken seriously throughout the film. For example, when alerting locals in a café to the dangers posed by the gathering birds, she is not dismissed as simply an irrational woman – because she is not. My positive feelings about the film and its female characterisation lasted until the penultimate, bird-chucking scenes. While Mitch and his family sleep in the living room of their house that has been boarded up in order to prevent death-by-beak, Melanie decides it would be a great time to carry out a little exploration upstairs. Naturally, this is when all feathery hell breaks loose. As she slowly climbed the stairs, I felt myself screaming at the screen. Why would a character who has otherwise been so rational and intelligent decide to make this move? Curiosity? Hysteria? Rebellion? It’s fair to say that Melanie’s reputation of rebelliousness precedes her at the beginning of the film, but she adamantly defends herself throughout, both vocally to Mitch, but also in her behaviour. My fear is that she is sent upstairs in order to make Mitch the hero, the stereotypical image of masculinity, carrying Melanie’s limp, injured body back down the stairs and leading the family to safety. I wouldn’t have such a problem with this if that had been the apparent dynamic throughout the movie – but I truly expected more. I did enjoy The Birds. The suspense was fantastic and I appreciated that it resulted from something other than the threat of an axe murderer. I will definitely continue to explore Hitchcock’s work, but my expectations of characterisation have been pared right back once again. It’s a shame, that.