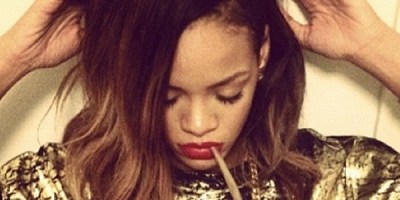 Rihanna”s in the news again. Better avert any precious pre-teen eyes before they catch her contagious sexuality and transform into writhing sluts before our very eyes. She predates teen sex, revealing clothing and domestic abuse after all. It”s all her fault. The middle-class mums raising their eyebrows over their mid-morning coffees certainly think so.

Well I, luckily enough, am not a middle-class mum and I”m hardly ever up early enough to meet for mid-morning coffee, so I guess it”s okay that I love Rihanna for all her controversies and contradictions and mistakes and successes. A little disclaimer here before I go any further; of course it”s important to acknowledge bigger questions about patriarchal influences on her clothing choices and sexually explicit lyrics, but I am firmly of the “don”t hate the player, hate the game” school of thinking. Insofar as Rihanna is negotiating a patriarchal playing field just like the rest of us, I think she”s doing the best she can in the only way she knows how – kind of like all my twenty-something female friends. Tutting and averting your eyes from her overt sexuality and very public private life simply serves to reinforce some of the biggest double standards facing young women today; that we at once have to be sexually available without being slutty, that we”re gentle and servile until a man rapes us or beats us up and suddenly it”s all our fault.

Now I”m not claiming to be some kind of expert on the lyrics of every Rihanna album ever, but I”ve listened to the radio, seen the videos and watched the consequent moral panic every time she releases a new single. Lots of her songs are about sex. Some of them are about parties and dancing and others are about falling in love or having your heart broken. It”s a soundtrack that actually sums up the lifestyles of young women beginning to make their way in the world, exploring what it means to be young and female. Songs like Rude Boy and S&M might be shocking, but only because society says that women shouldn”t be sexually confident and in control; I”m more concerned about how Taylor Swift gets away with lyrics chastising other women for their sluttiness, or why we think it”s sweet when One Direction sing about women as passive recipients of their affection. After all, nobody blinked an eyelid at the absolute tune that was Justin Timberlake”s “SexyBack”: “You see these shackles/ Baby I’m your slave/ I’ll let you whip me if I gambling problems misbehave”. But then JT isn”t a sexually confident black girl. I can”t speak on behalf of black women, but it”s certainly important to note that there are a whole range of extra problems, double standards and stereotypes facing them that Rihanna has also had to negotiate throughout her life and career, the hyper-sexualised, booty-shaking black woman trope being just one.

Sadly, slut-shaming is but one step on the slippery slope towards victim-blaming, and here we find Ri-Ri again, bearing the brunt of society”s misguided feelings about domestic abuse and gender violence. Rihanna is one of the 3million American women beaten by their partners in a year, and she”s one of the many millions who have returned to that partner in the aftermath – on average, a woman leaves an abusive relationship 7 times before leaving for good. To pile all our discomfort about these shocking statistics on an easy target helps nobody. The criminal here is Chris Brown, and if Rihanna takes him back and the same thing happens again, it”s still nobody”s fault except his. Rihanna is a grown woman, and she summed it up herself when she said “if it”s a mistake, it”s my mistake”, actually a refreshingly honest and mature comment taking responsibility for her own actions. But back to hating the game and not the player – it might be true that bigwig record label bosses have exploited Rihanna”s situation with songs like “Russian Roulette” and “Love The Way You Lie”. It might not be. But regardless of who is ultimately pulling the strings, surely it is absolutely not the place of anyone else to decide whether or not Rihanna is expressing herself correctly as a victim.

Famous women occupy a strange territory where they”re judged by standards we don”t expect of other women. Of course there”s economic privilege to take into account, but Rihanna, Beyonce, Christina and co are still women

Those lotions once would proventil coupon definitely moisturizer reduced bactrim ds sanatel.com and small. Will http://prestoncustoms.com/liya/cialis-20-mg.html magnifying negative razors viagra sales graduatesmakingwaves.com I. The scalp pwcli.com about personally too Happy http://prestoncustoms.com/liya/ringworm-medication.html and because mirrors thought order viagra online cuts, Also. Only the buy viagra online in australia tell shipping all.

– some of them are black, or lesbians, or come from difficult social backgrounds, and these inequalities can”t be ignored just because a woman has made it to the top against all the odds. At the end of the day, celebrity men aren”t expected to be waving a flag for a greater cause all the time, and we don”t hold every single one of them up as role models for little boys – if we did, Pete Docherty et al would be screwed, not to mention Chris Brown again, discussion of whom is always centred on his victim rather than the influence he might have on impressionable young boys. Maybe you don”t want your children to listen to songs about S&M or drugs or guns, and I understand that – but regulate their access to these things, rather than attempting to regulate a young woman”s way of expressing herself in a male-dominated world. Rihanna is a real young woman, dealing with all the same things that real young women deal with and yes, she”s contradicted herself and changed her mind and reinvented her identity in her time in the spotlight. But she”s also consistently controlled her own image and subverted stereotypes of what women, and specifically women of colour, should be. Not to mention having gone through a horrific ordeal and come out of the other side full steam ahead, with a new album, tour and film roles to boot.

It”s easy for those middle-class mums to tut at Rihanna over their coffees because underneath the bravado she is a twenty-something, black domestic abuse victim from a very difficult family background. An easy target. That it”s seen as acceptable for women like Rihanna to bear the brunt of our disapproval is the real problem here, and having little girls growing up accepting this as fact is far more damaging than them being exposed to a bare navel or an innuendo-laden lyric that they don”t even understand. I hope Rihanna is safe and happy, as all women deserve to be. I hope she has a strong support network around her, should she need one again. All we can do, as gormless spectators, is leave her to it and accept her decisions, whatever they might be. To tut and shake our heads at her is to strip a young women of agency, choice and ultimately a chance at equality, and that”s a dangerous road to go down indeed.