To my shame, I've only been to the cinema a handful of times this year, and twice of those were in the IMax. Very few films have been worth the trip unless they are special and deserve to be seen in a cinema, as opposed to in the comfort of my own warm home. Both Skyfall and Batman made me want to and in both there was something to be experienced, and IMax suited them perfectly Both commented in part on something of our culture too – Batman played with notions of revolution and occupy, poverty and injustice (see Zizek), where as Skyfall tangentially discussed the increasing role of the digital in questioning authority and particular hierarchies of power. But both had their faults, and neither managed to capture my attention or do something that really made me think – but the re-release of Star Wars Episode 1 Phantom Menace in 3D really made me… just kidding. The cinematic experience of Beasts of the Southern Wild felt to me like something special. It told a story that hadn't ever been told before – and by many accounts maybe could never have been told before, for a community which is rarely given a voice – and employed magic and invention, over and above big budget action and explosions, in a remarkable way which made going to the cinema so much more essential.
Other Contenders: Cabin In the Woods, We Need To Talk About Kevin, Battleship

Well Bond at 50 is as exciting as Bond has ever been, with Sam Mendes tackling the major characters in a way that hasn't ever been attempted in the on screen franchise. 2012 was a pretty big year for blockbusters with the Avengers tying together marvel films stretching back to Iron Man and blowing every nerds mind and load. I also had my first real IMAX experience with the fun and interesting if a bit early reboot of the Spider-Man series (better than 2001 Spider-Man, not as good as Spider-Man 2 and streets ahead of Spider-Man 3). Sadly I fund Dark Knight Rises dissapointing but after re watching it I realise that maybe its my own high standards for Nolan that let the film down (it is still slow and long). Out of all that however the best film I saw at the cinema this year was Jaws at the Cameo and the best film I saw at the cinema that was released this year was the brilliant Skyfall. 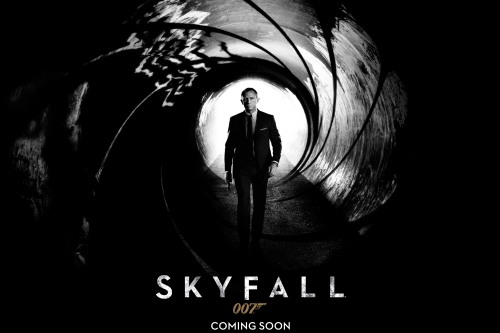 Given that I have seen a grand total of five new film releases this year, I am hardly a qualified film buff – but I’ll give it a go. In no particular order, those films were: The Perks of Being a Wallflower (cringe-inducing); Ted (awful); The Pirates! In an Adventure with Scientists! (mildly entertaining); Last Shop Standing (fascinating but far too short documentary on the rise and fall of the UK’s record shops) and, my film of the year choice: Skyfall. Nanu contributors, including myself, gave Skyfall the once over here: http://nanu-nanu.com/nanu-contributors-review-skyfall/ and all I said there still stands.

Importantly, however, I’m still interested. In mid-December, months after its release, I found myself trawling the internet for interviews with the film’s stars and creators, desperate to find out more about their characters and the ideas behind the plot development. This desire for a fuller understanding and an even greater depth of character knowledge speaks wonders about how Skyfall truly is a departure from Bond films of the past – there’s a lot more to modern Bond than misogyny and gadgets.

(And, let’s be honest, I still can’t get the wonderfully homoerotic scene between Bond and Javier Bardem’s villain, Silva, out of my head…)

This year has been unexpectedly good for Hollywood. With blockbusters like The Avengers, The Dark Knight Rises and Skyfall being particular highlights of quality as well as the usual popcorn fair. Many of the films at the Edinburgh International Film Festival were also noteworthy. MNL 143 was my personal highlight from the EIFF. However my choice was made for me in February with the release of Cabin in the Woods. Not being the biggest horror fan in the world I was not expecting to enjoy this meta-horror, but Drew Goddard surprised with help from nerd god Joss Whedon. It was my love for Whedon's television work that drew me to this film but everything about this was cinematic while still very much keeping the charm of that previous work. Wanting to buy a ticket to see the film again as soon as you have left the screen is a rare feeling.

There has to be something pretty special about a film for it to warrant me paying to see it twice at the cinema. I am a student, after all. I first saw Bart Layton’s stranger than fiction (cliché, but true) documentary, ‘The Imposter’ at its UK premier at this year’s Edinburgh Film Festival. After allowing myself to mull over what

I had seen for a couple of months, I just had to go and see it again on its general release. 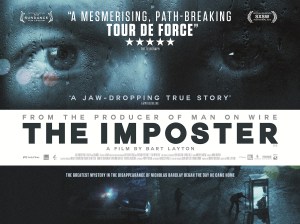 The film is one part documentary, one part intense thriller, although at times it is hard to believe that there is any trace of reality in it whatsoever. The film documents the strange case of the disappearance of a 13 year old boy in his hometown of San Antonio, Texas. Three and a half years later the missing boy’s family receive a phone call to say that their missing son has been found…in Spain. Overjoyed to have found their missing child, the family welcome their son home with open arms. However, there is something strange about their newly-returned son, not least that his eye and hair colour have miraculously changed and that he now speaks with a French accent. Their son is not the sixteen year old boy they believe him to be, but Frédéric Bourdin, a twenty three year old French con-artist. Bourdin manages to fool not only the boy’s own family, but US officials and police in both the US and in Spain.

An incredible story wonderfully shot, The Imposter was my cinema highlight of 2012