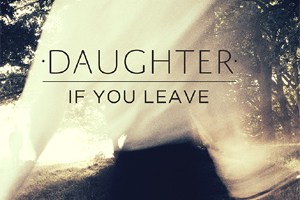 It’s been 18 months since Daughter’s last EP, The Wild Youth, was released. Since then they have signed to 4AD and produced a fresh sounding album that still remains recognisable to old fans. If You Leave, as a whole, is evidently personal to its writers. However, it is relatable, at least, to anyone who has ever been hurt. Although The Wild Youth and His Young Heart EPs were, to some, depressing, If You Leave is understandable to the point of comfort.

Lyrics aside, If You Leave is simply beautiful to listen to. The fragile guitar layers of the lead single, Smother, are stunning, whilst the reworked Youth somehow manages to be more poignant than its original. Human, unusually for Daughter, is relatively upbeat, and well placed between the calmer

Following last year’s sold out tour, Daughter are returning to Glasgow’s Old Fruitmarket in October, and you can also catch them at numerous UK festivals, including Field Day and Latitude. Since the album’s release, they’ve done a live session for Zane Lowe in which they covered Bon Iver’s Perth and Hot Chip’s Ready for the Floor. If you’re doubtful about this mix, have a listen (link below), it’s the best cover I’ve heard for a while.