General public reaction to my excitable “I went to see Franz Ferdinand on Friday night!” squeals has been a mixed bag of jealous delight and the slightly more dismissive “huh – I didn’t know they were still on the go”. So long has it been since their third album, Tonight, released way back in 2009 that unless you happened to catch them at one of their festival appearances this summer, they probably had fallen right off the radar.

Artsy café/bar/venue/record shop Mono was host to the band’s first gig in their home town for four years, with a small audience full of friends, fans and other arty Glasgow types keen to wish Mono a happy birthday. Other artists on the bill wowed in their own ways: getting the night started, Muscles of Joy are a wonderfully quirky all-female band, each of whom played a whole variety of unusual instruments. On the other hand, demonstrating the wide variety of music that Mono supports, RM Hubbert is a fantastic Glaswegian guitarist and emotive songwriter who has worked with the likes of Aidan Moffat and Alex Kapranos. His sense of humour equally did not disappoint. 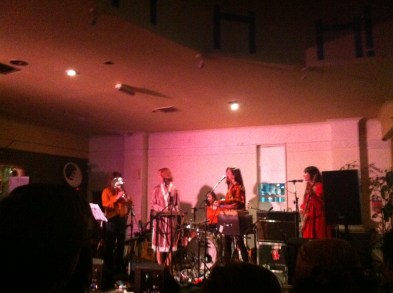 As headliners, Franz Ferdinand flew straight into ‘Take Me Out’ with as much exuberance and energy as they displayed during their early performances. All the biggest hits were ticked off – ‘

Matinée’, ‘Do You Want To’, ‘Ulysses’ – along with a couple of other classics, including debut single B-side ‘Shopping for Blood’. A rock steady cover of Dr Feelgood’s ‘Roxette’ went down well with the crowd. Throughout, the band really appeared to be enjoying themselves, making the gig all the more satisfying for the punters. 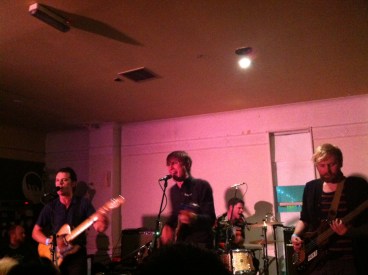 Among these well-known tunes, Franz Ferdinand played a few new songs, which seemed to hint at a step away from the heavier synth that dominated Tonight and back towards their guitar-driven debut album – let’s take a moment to absorb this and then breathe a collective sigh of relief. ‘Stand in the Horizon' was

a particular favourite although ‘I’ll Never Get Your Bullet Out of My Head’ was also a force to be reckoned with.

Back in 2002, Franz Ferdinand formed with the aim of making guitar music that “girls could dance to”. Ten years later, they’re still writing great songs and if their, albeit far too short, set on Friday was anything to go by, the girls are most certainly still dancing.

(… and happy tenth birthday to Mono, the kind of inclusive, independent venue that every city