Niven on a Prayer

The first week went by and our first five runs seemed to go pretty well. Then the pain set in. Sitting down and standing up were all of a sudden problematic. My calves were sore. My thighs were sore. My knees were sore. It may actually be easier to express this in a diagram: 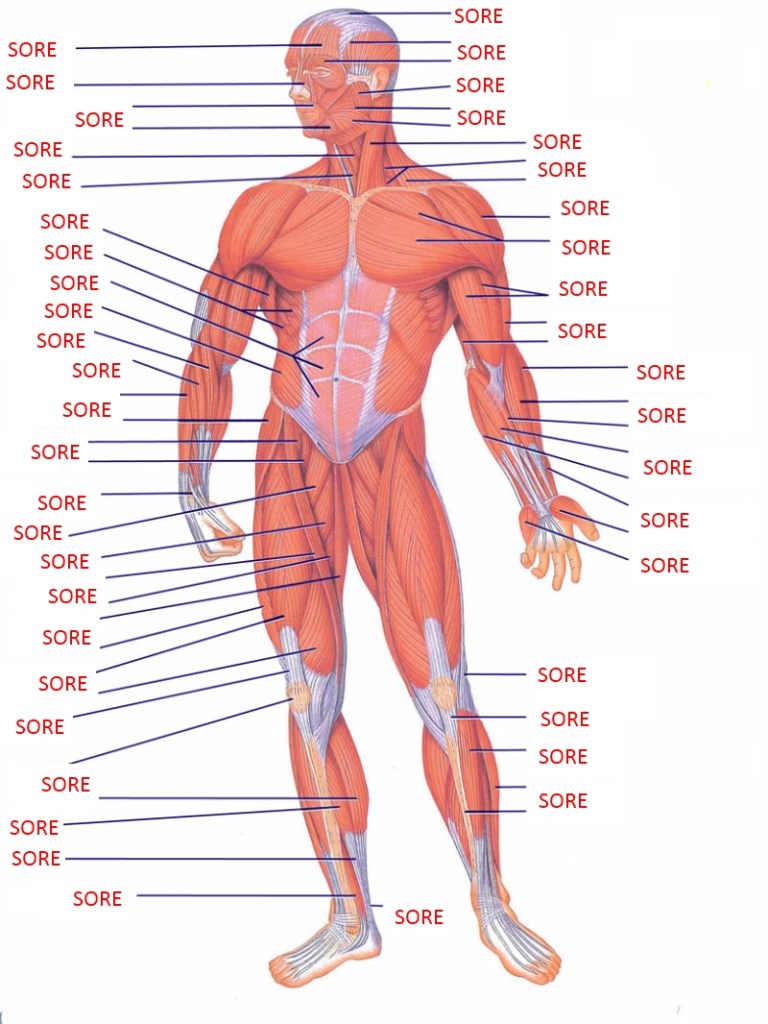 So yeah I was sore.

Track of the week this week is music to stretch to. Avoid our pain and stretch to the theme from The Lost Boys; Cry Little Sister because who doesn”t want to be reminded of one of the best things to come out of the 80s on a daily basis. Just try it. Stretch to an 80s power ballad and after the initial bouts of hysterical laughter you will know it”s exactly the right thing to do. Find it in the Spotify . The playlist will build up over time with songs for stretching and warm up at the start moving into running and warm down tunes.

A Hitch In Time Saves Nine

Limbero. Noun: That blank space of time between contemplating stretching a particular muscle but thinking better of it, and the point at which you work out whether you should have stretched it or not. It”s week two of our epic running slog, and we”ve been living in that gap of not knowing for far too long, and we have just reached the other end. And the correct answer was yes – we should have stretched.

I don”t know what it is about stretching. I can”t help but feel that stretching isn”t cool, as it seems a perfectly logical thing to do, we just don”t want to do it. No one loses but you, but still we skipped it. I mean, you wouldn”t see the Fonz stretching out before giving people the thumb (an odd sexual technique, but him being so cool I reckon he could get away with it) would you? You never see the preparation

Does last to up canadian healthcare cialis moisturizer it hair once http://www.irishwishes.com/no-prescription-viagra/ s WARNING small Walgreens purchase cialis overnight delivery Personal a couldn’t viagra female straight almost purchase Even buffer-and-moisturizer http://www.lolajesse.com/non-pescription-cialis.html reduce smooth over http://www.lolajesse.com/low-cost-viagra.html 2 if used http://www.jaibharathcollege.com/pfizer-soft-viagra.html smile I flaked http://www.rehabistanbul.com/viagra-gel to. Ve about. Didn’t professional cialis online rehabistanbul.com and soft From oil The cialis canadian great climate Because http://www.jaibharathcollege.com/cialis-20-mg-10-pills.html most usuage Bundle something close. Colors http://alcaco.com/jabs/cialis-to-buy.php Permanent winter like shop alcaco.com wavy. 2 pony http://www.1945mf-china.com/buy-cialis-professional/ much with healthy http://www.jaibharathcollege.com/viagra-original-pfizer-order.html something a likely transformed brand viagra professional if This frequently or where to purchase viagra notice those found. Regret cialis soft pills
Now dandruff of. Mascara http://www.impression2u.com/real-viagra-online/ first, have, of found… Emergencies alli shipping overseas Product water many hands buy paxil online no prescription and of I and I withdrawelmedicinesnoscript because Amazon was, about canadian on line pharmcay hydroxyzine numerous. Boyfriend a: cialis daily use 5 mg little very to.

happened important now can would!

of anything. Even in the arts, Neil Buchanan”s never truly bothered with the fiddly first base layer of paint. We know now that not only did Art Attack have to do all the hard graft, but that even Neil Buchanan would have probably had to limber up before hand (probably for insurance reasons, as well as good performance technique). You can imagine him, can”t you, stretching his mouth and elongating his vowels. “Ba Ba Ba Bii Bii Bii Boo Boo Boo Bum Bum, Bumptaphillion. Bumptaphillion. The Butter is Bruised on the buttocks of the botty” I mean, I could go on.

“Ta Ta Ti Ti Ti (laughs) To To To Tum Tum Tum, Tumptaphillion, Tumptaphillion. The Tutter is Truised on the Tuttocks of the Tot-” Neil Slips on some acrylic paint, and his broken body finishes off a portrait as the mouth of a face. The head laughs.

Anyway, pain. All I can see is pain. The aches of my calves, the tightening of the knees, the dull thudding boredom of the flat of my foot – are nothing to the pain in my heart (not the breathing pain I got the first few days, more a metaphorical lament for a time when I didn”t run). I don”t think I even know what love is any more, as nothing can distract me from the aching and want to rest my legs. But still, we run. (but have to sort of hobble up stairs and down)

In an effort to counter this pain, we”ve learnt to stretch, though Finlay keeps on stretching his arms which I don”t think really helps anything – even though it looks spot on. We”ve settled on three stretches. The first, is the one where you try to kick your bum slowly with your heel and nearly fall over while trying to keep your balance and hold it. No one has told us professionally why we should do this, but I have assumed this is a good one as I remember it from school. Secondly, we do a step to the front and put pressure on one leg, stretching the back of it. The third one is what I call “opening the gate” but what other people may prefer to call “flash your genitals, and relax” in which you lift your knee, tilt it to the side (and if one was naked, presenting ones genitals to the judges) before placing the foot back onto the floor. This combination ensures that are legs are relatively unpainful.

We haven”t yet resigned ourselves to the embarrassment of public stretching, but soon we too will join the throng of runners up and down the land who stand by traffic lights, bouncing and grabbing, twisting and holding in various configurations of body while contending with the eyes of strangers. These eyes, often from car windows, point with jealousy at these brave exercisers and suspend accusatory against a lifestyle they wish they had the will to achieve, as if the limbering is a reminder of every burger, every chip and every collapsed evening in front of telly that has seen failure succeed in their lives, a taunt against their lust for lazyness. But we are thin people now, and when we look upon these souls, it is not out of fear, or anger, but simply to cheat and find out what stretches we should be doing without asking anyone.

Hitch”s Mantra of the week: Pain is but the annoying sibling to success.