So the first Sunday of the month, and you are a bit Christmassed out from the . After all, it's only really getting started, and you don't want to blow your load to soon. It's too early to go Christmas shopping, but you still wanna watch a good, solid Sunday night film. I have the perfect thing for you.

Unlike yesterday's effort, this title creeps into the top ten of Christmas film lists for other reasons. Sure, it's a great film. It's a film you can watch any Sunday, of any year. It won't age. It's a timeless action flick that defined Bruce Willis' career for 20 years, and cemented his role as the action star of our hearts – and what's more, it's the best time he's played that role. But it's in every list as the Christmas film that people always remember being a Christmas film when people say what's your favourite Christmas film, but actually really isn't a Christmas film. You know? That's why I wanted to get it out of the way early, so people would stop chatting about Die Hard being the greatest Christmas film – it isn't, but it's ideal for this time of the year. Watch it now so that when people talk about it as the best Christmas film for the rest of December, it'll be fresh in your mind and you'll sound the expert.

Here we see some critical analysis of the film, back when it was released on vhs:

I don't know why you are still reading this, you know already from the moment I said Die Hard that you want to go see it, so treat yourself – I guarantee you've not seen it nearly recently enough, even if the last time you saw it was last night. It's

cold outside – do yourself a favour and go watch this film. It's over two hours long and it never feels like it for a second.

Okay, so you've already seen Die Hard, literally this morning, twice, and you don't fancy watching it for the third time today. I can understand entirely – but you still need the kind of Sunday night film that everyone can enjoy? Fine, give this alternative film a try… 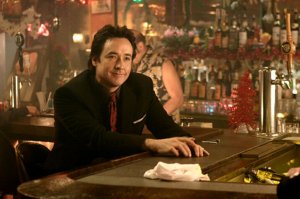 John Cusack as you've not seen him before. Look out for him later in the month

John Cusack turns up later in our advent calendar for perhaps one of my favourite Christmas films, but this one is often forgotten – and in many minds, completely unknown.

Set on Christmas eve, it's about a crime on the night before the big day, and it is debatable if this has more right to be a Christmas film, but at least it doesn't skimp on strippers, violence or fun. It's no Die Hard – but then what is? Die Hard. Watch Die Hard already. Even Die Hard 2 struggles to come close to Die Hard. Watch Mother Fucking Die Hard – then watch this. You done that yet? Yes. Good.

Editor's Note: It just so happens that the excellent Cry Baby Comedy will be hosting a Die Hard event for Christmas this coming Friday 7th December at the Banshee Labyrinth. Comedy and Die Hard on a big screen with an audience too – cracking night, go check it out!