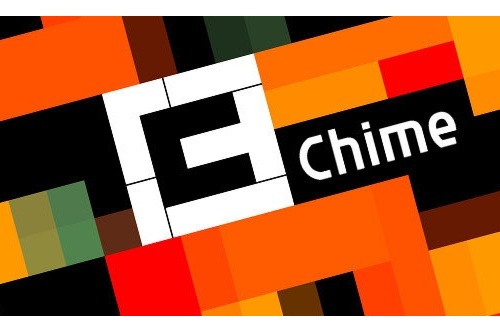 For those who remember Rez there will always be a place in your heart for the experimental genre which mashes music with gaming – less on cue button mashing from the likes of the Guitar Hero series, and more refined styles which fuse themselves with music in some way. For Rez, it was the shoot-em up, which casually built a soundtrack around how you played. For Chime, it is the gently addictive puzzle game upon which the soundscape is based.

Comparisons with Tetris will be inevitable given not only the trippy visuals that attempt to lure your attention away form the game board, but the key mechanics are very similar in Chime. By placing a series of geometrical shapes into larger blocks, you force them to disappear and score points – the added mechanic being that once removed, the vanished squares change the board’s colour, and it is this drive to cover the board in its entirety which fuels progress. Though it takes a couple of plays to understand really what’s going on, once you get it you really get it, and your innate tetris instincts take over. It is astounding how primal that bastard has drilled into your psyche – and it will never leave.

The twist in this case however is that whilst you are placing pieces, a white line washes across the screen, and in time with the music, chimes your pieces like a rudimentary xylophone – a feature not unlike modern synthesized instruments such as the Tenerion or its infinitely cheaper flash alternative. Though fun at first, this element does little to really take the game to another level, as it feels largely uninvolved with the gameplay, adding little but minute harmony, and without much intention from the player. Where as in Rez, you could conceivably adapt your play to style the music in certain ways, Chime gives you no control in this regard – or at least not to the extent that you would go out of your way to play differently.

However this isn’t important – the game itself is hugely addictive, especially in its manic multiplayer modes, though a little underdeveloped in terms of length. Any gamer worth their salt will have this completed with a few hours, and beyond the ten levels (each with 6 gameboards) there are unfortunately no exciting derivative modes which would easily extend play time. Though disappointing for a title costing £7, its length is somewhat remedied by a promise to give some of this money to charity, and with this in mind I still believe it is well worth the investment – though only if you are prepared to lose a few days to its beautiful simplicity.