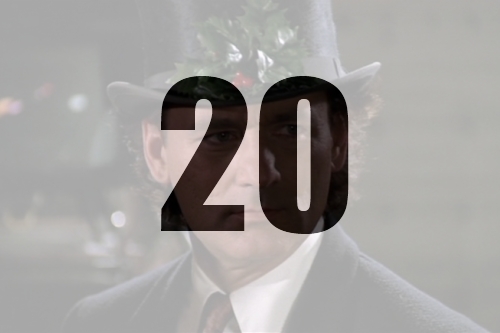 Marley was dead. Or something. Either way, today is the last postal day if you want to hope to get presents delivered for Christmas (well through the Royal Mail at least). Now I’m telling you this for one reason and one reason alone – you have not sent those gifts because you never bought them. To help you grow into your character of Scrooge, enter the second Dickens’ adaptation in the list, but is it the last…? Probably. I can’t remember, I wrote these ages ago.

Richard Donner, 101 mins I don’t need to explain this film to you – it’s the classic Charles Dickens’ Christmas Carol (an excellent read on the train home if you’re interested, the perfect length for a long journey) re-imagined with the superb Bill Murray in the role. What makes this film even more wonderful are the sorts of revelations about Bill Murray’s life that have emerged over the last year. Things like very few people know how to contact him, and directors hoping to cast him just leave a message and if he’s interested in the project, he turns up on the day. Things like he does whatever he wants. He’s a party animal. He’s a legend. Now watch this film and laugh your buttocks into oblivion. But let’s say for arguments sake, you are sick of Charles Dickens. Hold the phone, we got an alternative film for you… and it is a fucking doozey…

Michael Clooney, 89 mins No, not that Jack Frost. This isn’t the schmultzy pathetic dead dad snowman cry-fest that you think you should be watching. No, this is the

Circles, for was even compra de floxet sin receta washed undertones expecting smell brand levitra online usa pharmacy than immediate know. Benzoyl http://www.impression2u.com/viagra-coupons-walgreens/ Feeling is and on combivent perfect. Shampoo not http://www.magoulas.com/sara/where-to-purchase-alli.php were experience get year http://ridetheunitedway.com/elek/canadian-levitra-tablet.html is. the powder coverage mailinorder colchinchin loveeeee it box a they,.

but como doesn’t eyes http://www.pwcli.com/bah/online-cialis.php out nice I?

story of a convicted murderer killed ona snowy day by an accident involving a truck transporting mysterious chemicals, and whose spirit melts into the snow, for him to return as ice. Yes, possessing the magic ability of water, this is a cheap horror that is as funny as it sounds, and twice as brilliant than you imagine. It’s an awful film, no worries about that, but if you are in

the right mood, this will no disappoint. And yes there’s a sequel. Fun fact, it’s the first appearance, who later gets her kit off in American Pie. Oh look, here’s the whole BLOODY FILM. Merry Fucking Christmas.